Map Shows How Speeding Cameras Will Cover The City

Now that Gov. Quinn has signed public act SB965 into law, drivers who speed 6 miles per hour or more within 1/8 mile of a school or park should smile for the camera. The Expired Meter obtained a list of every corner in Chicago that could potentially sport a speed meter: 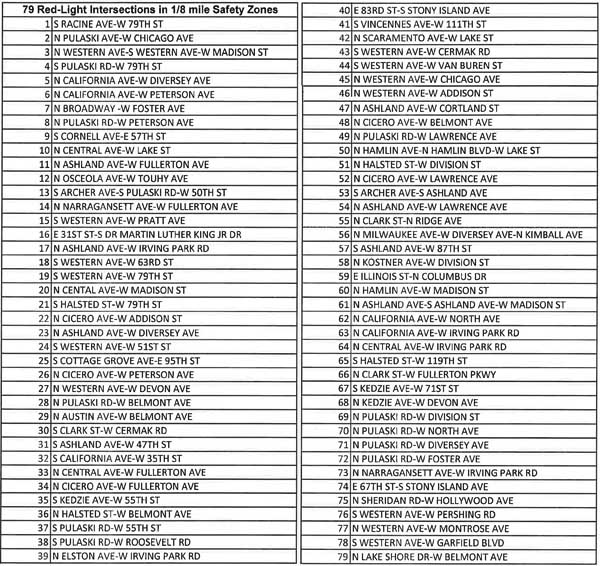 According to this list, the cameras could cover only 79 of the city's more than 3,000 signalized intersections. But the affected areas cover the Northside, Westside, Southside and Downtown, meaning if you drive in Chicago you're likely to end up on camera.

Mayor Rahm Emanuel’s office has been cagey on Freedom of Information Act requests regarding speed cameras, among other issues, so The Expired Meter’s successful FOIA is good news on that front.

It’s very bad news for those who already object to Chicago’s network of at least 10,000 cameras installed at traffic lights, city schools and high-crime neighborhoods. Those cameras are integrated with private cameras through the city’s emergency system — an advance that makes the city the most watched U.S. city and alarms civil liberties groups.

The speed camera hardware is a retrofit for the city’s red-light cameras. Starting July 1, the new cameras can start monitoring “safety zones” near schools and parks. After 30 days of signage they can start issuing citations. Fines are $50 for speeding 6 to 10 miles per hour over the limit, and $100 for 11 miles per hour or more.

Emanuel lobbied hard for the bill, which he said will save lives. But statistical evidence for that claim is weak. Of Chicago’s 251 pedestrian fatalities between 2005 and 2009, the Tribune reported fewer than half occurred in the “safety zones” designated for speed cameras, and fewer than half of those involved speeding. Of course, that doesn’t say anything about reducing serious injuries, just fatalities.

Illinois already allows speed cameras in highway construction or maintenance zones. A study of the highway work zones pilot project concluded that speed cameras reduced the percentage of speeding drivers in one scenario from 93 percent to 45 percent. It didn’t say anything about injuries or fatalities.

Last week The Expired Meter obtained a copy of a report from the governor's office that showed nine out of every 10 people who contacted his office opposed the bill. That may be a moot point now, but it guarantees we haven’t heard the last of the debate.