Chicagoist's Guide To June: 20 Fun Things To Do This Month

Hot town, summer in the city. This is what you've been waiting for, Chicago.

The annual DoDivision Street Fest has garnered quite the reputation as a destination for rock fans with a lineup booked by Empty Bottle and Subterranean. ADULT., The Ponys, Lucky Boys Confusion and Protomartyr are among the headliners for this year’s three-day fest in West Town. In addition to the two main stages, there’s also a The Family Fun Fest and “Sidewalk Sale and Do Fashion.” Entry is a $5 suggested donation.

Another great thing about summer in Chicago is being able to take your fitness outdoors! Millennium Park offers free Summer Workouts right on the Great Lawn throughout the summer every Wednesday and Friday. There’s pilates, yoga, strength training and Zumba classes to choose from. Each class is 45 minutes. Visit Millennium Park’s website for the full schedule.

Run through the colors of the rainbow at The Color Run Dream Tour beginning at 8 a.m. in Grant Park. This is one 5K that you won’t want to rush through as you pass through puffs of color in Color Zones and Lay’s Poppable Foam Zone. Stick around for the Finish Festival, with even more fun and color throws. Registration is $44.99 for an individual runner.

The Second City and NBC are teaming up once again for the 3rd Annual Break Out Comedy Festival. Seasoned comics share the stage with up and comers at the festival celebrating diversity in sketch, improvisation and stand-up. Comedians Danny Pudi (Powerless, Community) and Chris Redd (Popstar: Never Stop Never Stopping) are among the hosts for the three-night event at UP Comedy Club. Tickets are $20.

Blues Fest is a staple of Chicago summers, and this year is the 34th annual festival downtown in Millennium Park. This year celebrates the influence of urban blues on rock, R&B, rap and hip hop with a lineup that includes Rhymefest, Gary Clark Jr. and Billy Branch and the Sons of Blues. Performances take place day and night on four stages including Jay Pritzker Pavilion. Free.

The annual Andersonville street fest, Midsommarfest, takes over Clark Street with live music, dance troupes, vendors, kids’ entertainment, eats and more. Local shops and restaurants get in on the action, too with specials and sales. The Chicago Equality Rally will be held in conjunction with the fest on Sunday at 11 a.m. in solidarity with the National Equality March on Washington D.C. Entry is a $10 gate donation.

The Northcenter street fest at the intersection of Lincoln, Irving and Damen is known for two things: ribs and a kickass music lineup. Check out headliners Magic Giant, Diane Coffee and Grizfolk, and of course don’t miss Ribmania VIII. Entry is a $10 suggested donation ($20 for families) at the gate.

Wicker Park gets it’s own street fest this weekend with the environmentally conscious Green Music Fest. Since it’s debut nine years ago, they’ve had a remarkable live band lineup, and this year holds up with JD McPherson, Lucero and July Talk headlining. The pedal-powered stage is just one of the many “green” elements of the festival, where attendees pedal stationary bicycles to power amps, guitars, spotlights and more. Admission is a $10 suggested donation.

Book lovers will find themselves at one of the Printers Row Lit Fest events this weekend. The two-day showcase takes place at several different venues with a variety of different authors appearing for talks. Just some of the stand out names this year are NBA icon Kareem Abdul-Jabbar, Senator Al Franken and Golden Globe-winning actor Stacy Keach. Most events are free, but some do require a ticket purchase. Visit the festival website for more information.

The 6th Annual Chicago Alternative Comics Expo is here. Taking place at Center on Halsted from 11 a.m. to 6 p.m. each day, CAKE is a celebration of independent comics, small presses, publishers and readers. The free event features comics for sale, workshops, exhibitions, panel discussions and more.

Once upon a time the city combined it’s “Downtown Sound,” jazz and world music nights into one mega music series. Now we get see top acts in a variety of genres for free two nights a week on the Pritzker Pavilion stage in the heart of Millennium Park. This season’s Summer Music Series kicks off with performances from Blues artist Otis Taylor and Americana group Ben Sollee & Kentucky Native. The series runs throughout the summer on select Mondays and Thursdays at 6:30 p.m.

The Millennium Park Summer Film Series kicks off on June 13 with the 1980 Chicago classic The Blues Brothers on the big screen at Pritzker Pavilion. The series features classic and beloved films every Tuesday evening at 6:30 p.m. Caddyshack, The Shining, The Princess Bride and Wayne’s World are just some of the titles to look forward to this summer. Free.

The largest female comedy festival in the nation comes to Stage 773 this month. The 6th annual Chicago Women's Funny Festival features ‘highbrow musical improv’ to ‘relatable stand-up’ to ‘character driven sketch’ over more than 80 shows. Veterans like Katie Rich, Holly Laurent, Susan Messing and Rachel Mason will play alongside newcomers in the four-day fest. Tickets start at $15 for individual shows. Visit the festival’s website for the full schedule.

Another street's fest known for it’s stellar music lineup (we’re sensing a trend here) is Taste of Randolph. While the focus of the name is on restaurant row, the street fest could double as a legit music festival with headliners like Dawes, Eden and !!! (Chk Chk Chk). Admission is a $10 suggested donation. VIP options are also available.

Country music gets their day in the sun with the LakeShake Festival at Huntington Bank Pavilion at Northerly Island. Rascal Flatts, Miranda Lambert and Thomas Rhett top the three-day lineup. Lawn Passes start at $49.75.

MAMBY ON THE BEACH

MGMT. Walk the Moon. Miike Snow. Cut Copy. These are just a few of the bands playing Mamby on the Beach this year. The two-day music festival on Oakwood Beach comes to us from the folks at React and is Chicago’s only beachside summer music festival. There’s also “more than music” at the fest with Nadi Yoga and wellness workshops. Leave the kids at home though, because this fest is 17 and up. Tickets start at $122 for a two-day pass. Single day tickets are also available. After three years based in Humboldt Park, Dyke March, Chicago's annual pride celebration with a rotating location, is moving to Little Village, a.k.a. la Villita. Think of it as the more social justice-oriented, less corporate little sister to Chicago's massive annual Boystown Pride Parade. For the 21st annual march, organizers will begin near Piotrowski Park at 4247 W. 31st St. on June 24 (exact time TBD) and lead a half-mile march before ending up in Piotrowski Park. The event is still looking for volunteers and donations from people who want to help make sure it runs smoothly, and there are more details on the Facebook event page. 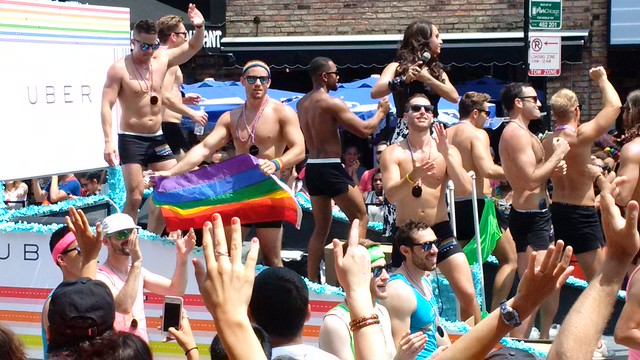 Pride Fest culminates with the Pride Parade on the last Sunday of the month (in commemoration of the anniversary of the Stonewall Riots). This is the 48th year for the celebration of Chicago's vibrant LGBTQ community, and as usual there will be live music, extravagant floats and outrageous fun. The parade itself spans Broadway and Halsted between Montrose and Diversey and steps off at noon.